Summary of The Inversion Factor 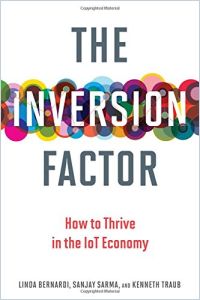 Three technology gurus predict the impact of emerging technologies, like the Internet of Things (IoT). The authors warn that the traditional consumer products sector faces imminent disruption. Those who build, market, brand and sell traditional products face oblivion. Winners invert the business model. First, they discover customer needs, such as easy urban transportation or lodging. Only then do they consider how best to fill them. Increasingly, they leverage the IoT’s interconnectedness and data. Disruption will increase dramatically as the IoT expands.

Throughout history, function followed form. Today, designers can make an object of any form do many things.

For most of human history, people used and traded objects that performed tasks according to form: A rock could bash, a stick could poke. More recently, people crafted items into forms that serve a purpose: hammers and nails, and screwdrivers and screws, for example.

Only in recent decades could designers give a thing capabilities that have nothing to do with its form.

Now, microwaves, cars, medical devices and many other things connect to the internet and to each other, giving them higher functionality. A watch, for example, can monitor your heart rhythm and blood oxygen levels, then communicate with your physician or personal trainer.

An economy of smart, connected things will alter the business landscape.

Experts believed that by the end of 2020, the number of internet-connected smart devices – the Internet of Things (IoT) – would grow to around 50 million, adding trillion of dollars in economic value.

The economy shifting from fixed to adaptable products means...