Summary of The Invisible Employee 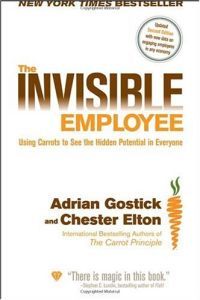 When staffers feel “invisible,” that is, when their work goes unrecognized by their superiors, they lose motivation and become less productive. In fact, unengaged employees cost firms billions of dollars annually in lost productivity, mistakes, turnover, retraining, and so on. Business authors Adrian Gostick and Chester Elton propose that employees who feel valued and appreciated perform better. With the aid of a basic, symbolic fable and backed up by numerous studies, Gostick and Elton offer simple, concrete techniques managers can use to reward outstanding work. You might wonder why you need to read this book since many of these tips also appear in the duo’s previous bestsellers, including The Carrot Principle. Yet getAbstract believes that managers and supervisors who adopt this book’s valuable advice will be able to perform a transformation: Abracadabra! Unmotivated, disengaged employees suddenly will become visible – like magic.

Adrian Gostick and Chester Elton co-wrote the bestsellers The Carrot Principle and The 24-Carrot Manager. They are both vice presidents of The Carrot Culture Group consultancy.

“The New Landscape of Business”

In today’s bleak economic environment, where layoffs, bailouts and foreclosures are commonplace, employees fear for their jobs. As their anxieties increase, they become less productive and more risk averse. At the same time, the workplace is becoming more pressure intense and less supportive. A study printed in The New York Times reported that:

The statistics also show the bottom-line consequences of having a disengaged, frustrated workforce. “Presenteeism,” which occurs when workers show up but don’t perform their job duties particularly well, costs American companies an estimated $150 billion every year. Studies conclude that presenteeism could result in lost productivity of anywhere between 16 and 31 days per employee per year. In addition, absenteeism accounts for an on-average...