Summary of The J Curve 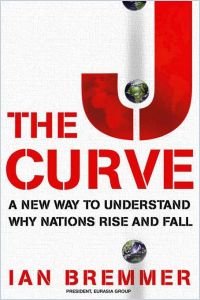 Nation states today are part of a delicate, interconnected global system, so one country's failure can create worldwide instability. While individual countries' problems seem disjointed, author Ian Bremmer provides a unified, overall way of explaining how nations develop in a world of constant change. He uses a “J curve” graph – featuring a center line shaped like a sans-serif J anchored in the upper right corner and tilted like a fishhook – to categorize countries according to their openness and stability. With this analytical system, Bremmer explains how each country flows along the J curve according to its unique history, culture and politics. Because his profiles make the world situation easier to understand, getAbstract considers this a major contribution to fostering a comprehensive view of world affairs. This book may not change the world, but it will help more people understand its intricate interconnections and why certain countries act as they do.

Ian Bremmer, president of a political-risk consultancy, also wrote New States, New Politics: Building the Post-Soviet Nations. He is a Slate columnist and a political commentator on CNN, FOX and CNBC. He has written more than 200 articles in international publications, including The Financial Times, The Wall Street Journal, the Harvard Business Review and The New York Times.

The world of foreign policy groups nations as stable or unstable. Stable countries can handle bad jolts to their political or economic systems, and still function. These stable nations can be open or closed, democratic or authoritarian. Ironically, such countries as pre-war Iraq, North Korea, Cuba, communist Russia and communist China, are deemed stable because they are or were closed to outside political and economic influences. In contrast, open societies, such as the United States, Japan and Sweden, are stable because they have free economic and political interchanges with other nations. They can withstand shocks because they have stable institutions that can manage crises.

To illustrate different nations' political and economic behaviors, political scientists devised a J-shaped curve that gauges how a country rates on openness and stability. Countries can move fluidly along this "J curve" as they progress from being open societies that share ideas, goods and services, to being more closed and restrictive, or the reverse.

Visually, the top of the J is in the upper right hand corner of the chart and lies at an angle toward the bottom...