Summary of The Last Lecture 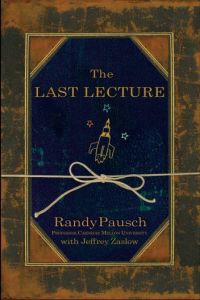 On July 4, 1939, Hall of Fame first baseman Lou Gehrig, fatally ill with Amyotrophic Lateral Sclerosis (ALS), the disease that would be named after him, told a capacity crowd at Yankee Stadium that he was “the luckiest man on the face of the earth.” Sixty-eight years later, computer science professor Randy Pausch, who had terminal pancreatic cancer, delivered his “last lecture.” Like Gehrig, Pausch used the opportunity to express his gratitude rather than focusing on his terrible misfortune. In an hour-long taped presentation that earned worldwide acclaim as it spread throughout the Internet, Pausch summarized his philosophy, and spoke of the importance of ambition, hard work and perseverance. Pausch’s main objective was to leave a meaningful legacy for his three children – and he succeeded brilliantly. His book, written with Jeffrey Zaslow, expands on the themes in his lecture, entitled “Really Achieving Your Childhood Dreams.” Pausch served up heaping portions of wonderful life-affirming advice. You’ll discover the qualities that made him so special. You’ll count your blessings. You’ll cry. You may even feel embarrassed or ashamed for those times when you lapse into self-pity. getAbstract believes that every reader can draw inspiration from this remarkable man who embraced and celebrated life even as he faced his death, which came on July 25, 2008.

Many colleges conduct a series of “last lectures” in which they ask professors to imagine that they are about to die and to think about what wisdom, philosophies or beliefs they would like to pass on before they go. Randy Pausch’s participation in Carnegie Mellon’s series, renamed “Journeys,” represents the ultimate irony. Pausch, a noted computer science professor at the university, prepared his final lecture knowing that he was dying of pancreatic cancer.

Conflicting emotions tormented Pausch as he prepared the lecture. Considering the prognosis that he had only months to live, he certainly could have cancelled it. Married to Jai, and the father of three children ages five, two and one, Pausch had precious little time left with his loved ones.

They had recently moved from Pittsburgh, home of the university, to Virginia where Jai’s family lives. She was upset that his flight back to Pittsburgh for the lecture coincided with her 41st birthday – the last one they would celebrate together.

However, Pausch came to the realization that his lecture could serve as a legacy for his children. He wanted them to understand what he stood for and...