Summary of The Lexus and the Olive Tree 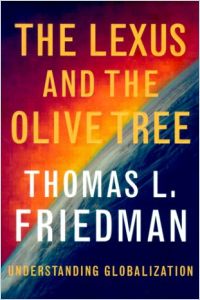 Thomas L. Friedman explains that the old world order of the Cold War has been replaced by a new paradigm of globalization. In this system, finance, information and technology are being democratized. The Lexus automotive brand of the title is the emblem of globalization. The Olive Tree stands for deep local cultural connections. The tension between globalization and cultural identity is the defining conflict of the new era. Friedman excels at making connections among diverse events and is a brilliant storyteller. He is particularly good at translating complex ideas into vivid, clear, colloquial language. His observations seem so simple that it is easy to miss how profound they are. His arguments seem almost irrefutable. He is basically optimistic and chooses not to dwell much on the dangers implicit in this new world. getAbstract.com recommends the book to everybody. Because Friedman draws heavily on his rich store of anecdotes this book is best appreciated in its full length.

Thomas L. Friedman is the Foreign Affairs columnist for the New York Times. He has won two Pulitzer Prizes for his reporting as Times bureau chief in Beirut and Jerusalem. His first book, From Beirut to Jerusalem, won the National Book Award in 1988.

With the end of the Cold War, a new dominant international system is in place. This system is globalization. The Cold War system, which fell with the Berlin Wall in 1989, had its own clear rules and paradigms. It was defined by the ideological clash of communism and capitalism, deviding the globe into three camps - Communist, Western and Neutral. Its defining technology was nuclear weapons and the defining fear was nuclear annihilation.

The "Post Cold War" world is defined by rules and paradigms of globalization. This is a dynamic process which integrates markets, nations and technologies in unprecedented ways. The driving idea behind it is free-market capitalism. The dominant culture is largely Amercian, so there is cultural homogenization. The defining technologies are computerization and miniaturization. During the Cold War, the defining communications device was the "hot line", used only by leaders. In contrast, globalization utilizes the Internet. This is available to everyone.