Summary of The Myth of the Strong Leader 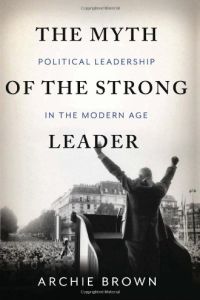 Human psychology offers this paradox: People crave forceful political leaders who are willing to talk tough, flex their muscles and get things done. Yet in many cases, strong leaders are exactly the wrong choice, argues British professor Archie Brown in this rich examination of leadership in modern world history. Brown points to Lenin, Hitler and Mussolini as political figures who became too strong for the good of humanity. They’re extreme examples of leaders convinced of their own genius who refuse to consider dissenting opinions and, as a result, create chaos and pain. Brown cites Franklin D. Roosevelt, Lyndon B. Johnson and Abraham Lincoln as leaders who effectively exerted their will with good intent despite the restraints of America’s system of checks and balances. This informative, deeply researched study recasts the historical record along an intriguing theme. getAbstract recommends Brown’s insights to managers, investors, public administrators and policy makers seeking to understand political leadership.

Emeritus professor of politics at the University of Oxford Archie Brown is a foreign honorary member of the American Academy of Arts and Sciences.

Throughout the world, people call for powerful leadership. In the popular view, a “strong leader” gets things done, typically by outmaneuvering his political rivals and grabbing decision-making power. Yet, strong leaders are not what society needs, and the public should judge leaders on many levels, not just on weakness versus strength.

Adolf Hitler and Benito Mussolini were powerful leaders who led the world into chaos. Vladimir Lenin, Josef Stalin, Pol Pot and Fidel Castro were strong leaders who also wrought a lot of damage. However, strong leaders aren’t always evil or destructive. The political systems in which they operate define them. Strong leaders pose a particular hazard in formerly authoritarian regimes evolving toward democracy.

Democracies limit the power of a single ruler, so in a democracy, strong leaders are never as strong as they claim. They typically follow the wishes of their party or powerful interest groups. While John F. Kennedy, Franklin D. Roosevelt and Abraham Lincoln were assertive presidents who used their powers of persuasion for good, the separation of powers in the United States limits presidential...

Leadership in Turbulent Times
9
Anti-System Politics
8
Can It Happen Here?
8
The Red and the Blue
8
The Upswing
9
Erdogan’s Way
6