Review of The Narrow Corridor

Daron Acemoglu and James A. Robinson 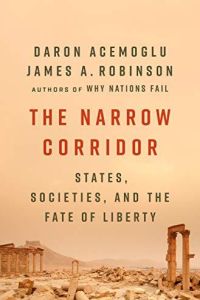 People in the West often view political liberty as a state which, once achieved, will remain the status quo. According to economists and best-selling authors James A. Robinson and Daron Acemoglu, however, liberty exists only in the fragile balance between a strong state and a strong society. In The Narrow Corridor, the pair delve into global history to illustrate why democratic institutions will not, in and of themselves, protect against abuse of power. Rather, liberty relies upon an educated citizenry continually and proactively defending its rights against state encroachment.

If it’s been awhile since you took a civics class, this book offers a helpful refresher. The sheer breadth of historical case studies used – from Ancient Sumer to the Swedish response to the Great Depression to the end of apartheid in South Africa to the present-day rise of populism – is impressive and convincing. The authors’ reliance on neologisms like “cage of norms” and “Red Queen effect” may, initially, feel intimidating; but, ultimately, these terms function as a helpful and memorable shorthand. The text provides a sobering assessment of the fragility of liberty, but Robinson and Acemoglu also reassure readers that it is possible to widen the narrow corridor of liberty, or to return to it.

James A. Robinson is a professor of political science and economics at the University of Chicago. His coauthor, Daron Acemoglu, is an economist and professor at MIT.

Society needs the state, but can easily become its victim.

The Enlightenment philosopher John Locke once defined liberty as the individual’s “perfect freedom” to do what they wish with their possessions “without asking leave, or depending upon the will of any other man.” A liberated man is also free of threats or harm to his person and possessions. In short, some degree of safety is required for liberty. How is this safety achieved? According to Robinson and Acemoglu, the best way is through the power of the state – or, as 17th-century philosopher Hobbes termed it, the Leviathan. The state helps to balance competing interests and provides essential protections to its citizens by creating and enforcing laws against violence and other crimes. Yet the state can abuse its powers. It can subject its citizens to terrors and restrictions roughly equivalent to what might exist in its absence.

A strong society is needed to keep the state in check.

How can you make sure that you’re designing a state that fulfills its desired role, but doesn’t overstep its bounds? This is known as the “Gilgamesh problem,” so named for the Sumerian king who used his powers to create a beautiful city, only to abuse it with his boundless arrogance. The way to rein in Gilgamesh – that is, the solution to this problem – is to have an active and engaged populace. The state must be strong to be effective and maintain its legitimacy in the eyes of its citizens. But, Robinson and Acemoglu argue, society must control the authority of the state, and be educated and engaged if they hope to check the state’s power. The narrow corridor of true liberty lies in this balance.

The Wrong Kind of AI?
8
Democracy Does Cause Growth
8

Why Liberalism Failed
5
Pakistan Under Siege
8

Spies, Lies, and Algorithms
7
The Age of Walls
8
Aleppo After the Fall
9