Summary of The New American Expat 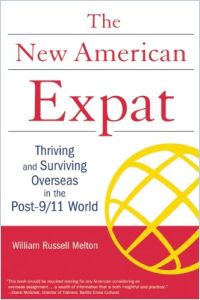 This book offers a refreshing voice of common sense, balance and experience. Books on this subject walk a tightrope between being too politically correct to address relevant stereotypes or, conversely, being too fixated on stereotypes to transcend them. Author William Russell Melton manages the task effortlessly, thanks to his experience of working in more than 20 countries. Relevant for those merely contemplating work abroad, as well as for those who just sat on their suitcases in order to zip them shut, this volume should prove to be a tremendous asset to any Yankee relocating to King Arthur’s Court (or anywhere else). Melton advises Americans to be themselves, but to use common sense and show a little deference. For instance, listen more and speak less (and not so loudly, please). The author’s goal is to develop confident world citizens who can interact adroitly on the world scene while staying true to their American values. The 23 pages he devotes to post-9/11 security abroad are frankly insufficient given the book’s subtitle, but the quality of the information is top drawer. Melton even adds advice on how to make the transition when you return back to the United States. getAbstract strongly recommends that any American thinking of overseas employment should study this book – otherwise, things could get ugly.

William Russell Melton has been an international lawyer and executive manager for almost three decades and has experience working in 20 countries. He is also the author of The Complete Idiot’s Guide to Playing the Harmonica.

In the post-9/11 world, American citizens living abroad will find it more difficult than ever to fit in – not that conformity has ever been a particularly American value. Widely reported anti-Americanism is probably exaggerated, but one way to comprehend the issue is to consider globalization as a euphemism for Americanization. For instance, English, French and Chinese influences on other cultures appear to have had less impact than the rampant Americanization occurring abroad.

This influence carries responsibility: Americans must collaborate to build a world neighborhood characterized by mutual understanding and respect. The alternative is intolerance, with all of its antipathy. On one hand, America’s economic, military and cultural influences are ascendant; on the other, American assumptions of security collapsed in smoke on September 11, 2001. These circumstances present US expats with an entirely new set of challenges.

Stereotypes abound on both ends. Other people hold both pro and con stereotypes of Americans. On the positive side, Americans are thought to have a strong work ethic. They are seen as positive, can-do thinkers and confident...