Summary of The New Financial Capitalists 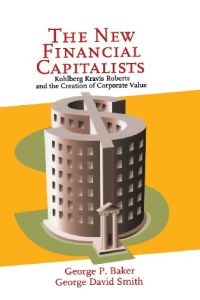 This revealing book covers a highly charged and controversial period of American investment history. George P. Baker and George David Smith study the emergence of the investment house Kohlberg, Kravis, Roberts (KKR) and follow it during the decade KKR ruled the world of leveraged buyouts. The authors begin with the early days when the partners worked together at Bear Stearns. They track the men as they build their own firm and create their own success. In clear, straightforward language, the book presents KKR’s intentions and the economics of leveraged buyouts (LBOs). It discusses KKR’s role in structuring and managing the deals. getAbstract recommends this book as a must read for anyone interested in LBOs or the history of KKR. Executives at all levels will find the KKR saga interesting and useful.

George P. Baker, a Harvard Business School business administration professor, holds his Ph.D. in business economics and a Harvard MBA. He is an associate editor of the Journal of Financial Economics, and a director of Clear Communications, Inc. His many articles cover management incentives, leveraged buyouts, and organizational economics. George Davis Smith, clinical professor of Economics and International Business at New York University Stern School of Business, earned his Ph.D. in history from Harvard in 1976. A consultant to major corporations, he has written numerous articles and four books, including Anatomy of a Business Strategy and From Monopoly to Competition.

In the realm of corporate mergers and acquisitions, the actions of Kohlberg, Kravis Roberts (KKR) were very innovative. The firm’s introduction, development, and use of leveraged buyouts (LBOs) altered the way corporate ownership changed hands, particularly as regards under-performing or poorly managed companies. In the realm of mergers and acquisitions, KKR took some very disturbing steps. The power to resolve a distressed company’s performance problems shifted from corporate management to KKR. While experts disagree about whether or not the use of LBOs is good for society, they agree that KKR is the most well known and notorious LBO player.

The Four Waves of Merger and Acquisition Activity

Four waves of merger and acquisition are landmarks in the United State’s economic history. The use of LBOs is the fourth wave, which started in the late 1970s. The three earlier waves of merger and acquisition activities were financial capitalism, managerial capitalism, and conglomerate formation. Financial capitalism refers to the period from the late 1890s to the 1910s, when the large capital requirements of infrastructure industries led companies to make...

The Master Switch
9
Temp
9
Subscribed
8
Lead Right for Your Company’s Type
8
Too Smart for Our Own Good
8
Am I Being Too Subtle?
8