Summary of The New Jim Crow 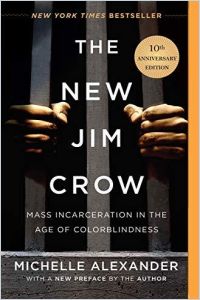 Michelle Alexander’s 2010 indictment of America’s penal system helped spark a new generation of civil rights and prison reform/abolition activism including the Black Lives Matter movement. It influenced the work of countless racial justice activists and educators. Alexander, a civil rights attorney and legal scholar, makes a compelling case that, far from having transcended race, the US criminal justice system has deliberately consigned millions of people of color to a new form of discrimination, disenfranchisement and stigma.

Michelle Alexander is a civil rights lawyer, advocate and legal scholar. A graduate of Stanford Law School and Vanderbilt University, she teaches at Union Theological Seminary and writes for The New York Times.

Racial caste in the United States didn’t end after Jim Crow – it just took a new form: the penal system.

Even before America became a country in 1776, its elites depended on the concept of race as a tool to divide poor people and keep them from uniting in revolt. Near the end of the 17th century, wealthy planters introduced racial caste by offering poor whites a “racial bribe”: giving poor whites privileges withheld from black slaves. The bribes included certain measures that gave poor white servants direct power over black slaves.

Race-based division and control persists today, but the system has transformed to adapt to social changes. After the abolition of slavery, the caste system re-formed into Jim Crow: the system of laws and practices that ensured racial segregation and discrimination throughout the American South, disenfranchisement of black people, and the continuance of the divide between poor whites and blacks.

Jim Crow gradually collapsed over the course of the 20th century. The 1960s saw poor whites and blacks begin to converge as the Civil Rights Movement gave birth to a Poor People’s Movement. By that time, however, a new racial order had begun...