Summary of The Nuclear Tipping Point 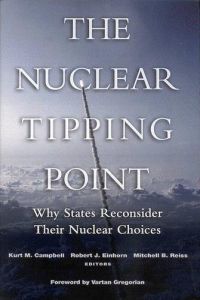 This book stems from a three-year-long collaboration between the Center for Strategic and International Studies and the Reves Center for International Studies at the College of William and Mary. Scholars studied eight countries currently committed to nonproliferation - Egypt, Syria, Saudi Arabia, Turkey, Germany, Japan, South Korea and Taiwan - to determine what scenarios might make them change their minds. The objective was to study how the nuclear genie might get out of the bottle - but it also indicates ways to keep it contained. The book intentionally does not focus on proliferator states, such as North Korea or Iran. Even with that omission, getAbstract recommends it for the stark realities its research uncovers. One is that nonproliferating nations all look to the U.S. for reassurance that the world will stay safe for those without nuclear weapons. Another is that the world must stop Iran and North Korea's atomic ambitions, lest a tipping point occurs that would provoke other nations to conclude that their security requires swinging the biggest stick.

Deliver Us from Evil

Albert Einstein once observed, "It is easier to denature plutonium than to denature the evil spirit of men." Nuclear power, Einstein said, changed everything except human thinking, "and thus we drift toward unparalleled catastrophe." He likened humanity's wielding of nuclear weapons to a pathological criminal with an axe in his hands. Given that reality, today's nuclear environment is more dangerous than ever. On February 11, 2003, then-CIA Director George Tenet warned the U.S. Senate Select Intelligence Committee, "The desire for nuclear weapons is on the upsurge. Additional countries may decide to seek nuclear weapons as it becomes clear their neighbors and regional rivals are already doing so. The 'domino theory' of the twenty-first century may well be nuclear."

What makes a country spurn the world community to develop nuclear weapons? Is the globe near a "tipping point" where several countries might be tempted to seek nuclear weapons? And, if evil cannot be distilled from the human spirit, how can it at least be discouraged?