Summary of The Obstacle Is the Way 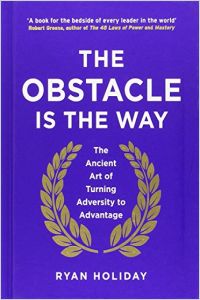 In 170 AD, Roman emperor Marcus Aurelius wrote, “Our actions may be impeded…but there can be no impeding our intentions or dispositions. Because we can accommodate and adapt. The mind adapts and converts to its own purposes the obstacle to our acting.” He concluded, “The impediment to action advances action. What stands in the way becomes the way.” Marcus was a Stoic. His thoughts encapsulate the words of other illustrious Stoics: “Chrysippus, Zeno, Cleanthes, Ariston, Apollonius, Junius Rusticus, Epictetus, Seneca” and “Musonius Rufus.”

An ancient Zen parable features an almost identical line of thinking, stating: “The obstacle in the path becomes the path…Within every obstacle is an opportunity to improve our condition.”

Marcus knew about obstacles. Frequent wars were prominent throughout his 19 years as emperor, during which his realm suffered a horrible plague. He faced a meager treasury, an attempted coup, a hoggish brother-in-law, as well as toilsome travel throughout the Roman Empire – from Asia Minor to Syria, Egypt, Greece and Austria. However, he never lost his patience, grace or courage. People of his era admired Marcus as a great...

Stillness Is the Key
9
Trust Me, I’m Lying
9

Perennial Seller
8
Ego Is the Enemy
8