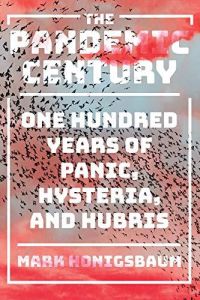 One Hundred Years of Panic, Hysteria, and Hubris

The review below was first published in the getAbstract Journal on Mar 26, 2020.
We’ve reviewed this title for you as we currently cannot offer a summary.

The coronavirus that caused SARS was a harbinger of what’s to come.

In early 2003, Mark Honigsbaum reports, a Chinese bat likely infected a civet in one of China’s “wet markets,” where multiple species of live animals sit side-by-side in cages waiting for someone to buy, butcher and eat them. The bat may have carried the virus – severe acute respiratory syndrome coronavirus, SARS-CoV – that caused severe acute respiratory syndrome (SARS). Scientists had believed that coronaviruses attacked only animals, and were mild when they crossed over to humans. The virus itself was thought to lack a protein that would allow it to bond with a human cell. Nevertheless, either directly from the bat or from an infected mammal, Honigsbaum tells, the virus gained its missing protein.

The virus infected a Chinese businessman who traveled to Hong Kong and checked into the Metropole Hotel in February 2003. He contaminated surfaces and the air for hours. Honigsbaum stresses that people who were only in elevators picked up the infection. They traveled throughout Hong Kong and elsewhere.