Summary of The Panopticon Is Already Here 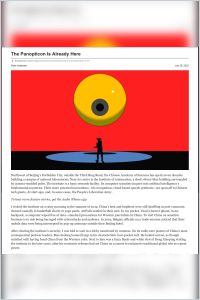 Democracies lead in AI chips and research, but China could achieve its goal of AI supremacy by 2030. China’s government knows almost everything about its people, from their DNA to their most recent purchases. It wants to know more. China has the largest surveilled population in the world, and its monitoring systems are now in use around the globe. Americans seem unconcerned beyond wanting the latest AI devices that live in their homes and understand their verbal commands. The Atlantic’s deputy editor Ross Andersen cautions that the world should recognize and forestall surveillance’s dominance before it’s too late.

Ross Andersen is a deputy editor of The Atlantic.

In the race for AI chip supremacy, the United States may have just a 10-year lead over China.

The artificial intelligence (AI) future is here and it’s astonishing – from instant “translation of spoken language” to earlier detection of viral outbreaks. And that future is dark. China is building integrated AI surveillance, and already has installed “hundreds of millions of surveillance cameras” to gather personal data for government use.

The Institute of Automation, China’s artificial intelligence (AI) research center outside Beijing, creates technology – such as iris recognition and “cloud-based speech synthesis”– and gives it to Chinese tech companies and military. President Xi Jinping’s stated goal is Chinese AI preeminence by 2030. Industry analysts expect the United States to remain ahead in innovation until at least that time. America’s chief technology officer (CTO), Michael Kratsios, believes democracies must continue to lead in AI to preserve privacy in the United States and other places.

Surveillance of a far-flung empire by a centralized government dates back thousands...

Can Computers Ever Replace the Classroom?
9
Forget TikTok. China’s Powerhouse App Is WeChat, and Its Power Is Sweeping.
8
Global Trends 2040
8
An Ethics Guide for Tech Gets Written With Workers in Mind
8
China Deserves Donald Trump
8
Five Ways to Win in China’s Changing Mobility Market
9