Review of The Peter Principle 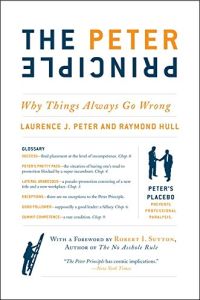 Laurence J. Peter remade management tactics and perceptions forever when he and co-author Raymond Hull first published this funny, best-selling business classic in 1969. The title became the standard description of the pervasive, almost ineradicable management problem they describe: If you – or anyone else – perform well at your job, you will get promoted, but there’s a catch. Your first promotion is likely to move you to a position that demands most of the same skills you used at your previous position. If you do well at your new job, you will get promoted again. Each time you get promoted, your new position will require fewer and fewer of the skills, perceptions, habits or managerial abilities that enabled you to shine at your first job. At some point in this cycle of recurring promotion, you will get promoted into a job for which you aren’t prepared and can’t perform. You will “rise to [your] level of incompetence.” And there you will stay.

Laurence J. Peter (1919-1990) held an EdD from Washington State University. His other books include The Peter Prescription and The Peter Pyramid. Raymond Hull (1919-1985) was a Canadian playwright, television screenwriter and lecturer. He is known for the saying “He who trims himself to suit everyone will soon whittle himself away.”

For example, good political campaigners are seldom competent at governing. “Good followers” don’t magically become “good leaders,” and, while conformists thrive, rebels often don’t. Peter identifies the organizational problem behind this phenomenon: The people at the top, ipso facto, aren’t good at their jobs. And, the greatest fear of those at their level of incompetence atop the ladder is being found out. That’s why midlevel managers revile those who excel. If you show excellence, you threaten the hierarchy. And all hierarchies share one goal – maintaining themselves. The most necessary survival skill an employee needs is “creative incompetence,” doing enough to get by, but not enough to be offered a promotion, ever. Have you wondered why those high up in a company or bureaucracy perform their jobs so poorly? Now you know.

The Peter Principle comes with a crucial corollary: “Work is accomplished by those employees who have not yet reached their level of incompetence.” Behaviors like “professional automatism” thwart the will and desires of competent people. Peter cautions that professional robots vest in the identifiable chores of work – such as filling out forms – rather than in the work itself. This employee or boss acts and works as if paperwork matters more than the actual task the papers describe. But the automaton knows paperwork is quantifiable. If you do all your paperwork, you might get promoted. Someone who’s really good at a job but hates paperwork doesn’t stand a chance. Superiors like “dependability, consistency” and “method.” They don’t care much for originality. Peter warns that most bosses value “internal consistency” over “efficient service.”

Every Job Is a Sales Job
8
Everybody Has a Book Inside of Them
6
Why They Buy
6
Business Writing Tips
7
Lose the Resume, Land the Job
8
The 100X Leader
8