Summary of The Plateau Effect 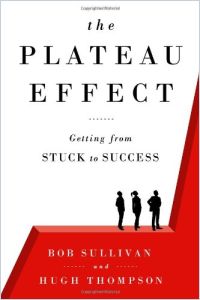 The central premise of Bob Sullivan and Hugh Thompson’s fresh look at the barriers you face in realizing your potential or achieving life breakthroughs is that you don’t have “problems,” you have “plateaus.” Some plateaus are behavioral, others are psychological – and all in your head – while some are societal and others, biological. You encounter plateaus when you go along with the consensus, when your life lacks diversity, when you fail to manage your time, when you seek perfection and when the fear of failure keeps you from trying new things. The book is longer than it needs to be and its attempts at humor mostly fall flat, but getAbstract recommends the authors’ insights to anyone feeling stuck in a rut and looking for a way out.

Bob Sullivan is a New York Times best-selling author and a top online journalist who reports on fraud in the US. Hugh Thompson is a professor, speaker and executive adviser about cybersecurity.

“Plateaus” and Why They Happen

Like all humans, you’ve evolved so that the noises, smells, sights and other stimuli you experience don’t overwhelm you. When you first move from a small town to a big city, you can’t sleep because of the noise, yet eventually you become as immune to it as a native. You fall in love with a new ice cream flavor, but after you binge on it for weeks, it loses its appeal and you’re back to chocolate chip. You get used to things – bad and good – and reach a form of “plateau.” But if you’re marooned on a plateau in your career, or in a relationship, do not keep doing more of what got you there.

You’re at the top of your game, number-one in your field, when suddenly the rug gets pulled out from under you. You probably missed the warning signs because they were incremental and occurred just under your radar. You weren’t paying attention, you were stuck in your ways and you weren’t agile.

For example, Blockbuster once ruled the home entertainment industry. It had the resources and talent to dominate for decades, if it had been alert to changes in its market. By the time it awoke to the new reality created by Netflix...