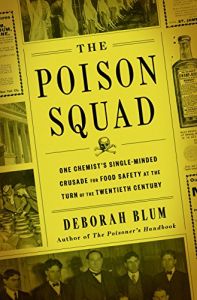 The review below was first published in the getAbstract Journal on Mar 14, 2022.
We’ve reviewed this title for you as we currently cannot offer a summary.

Deborah Blum – who won a Pulitzer Prize reporting for The Sacramento Bee – also wrote The Biologicial Differences Between Men and Women. Her books have won multiple awards for their rigorous reporting and immersion in the their eras. Blum turns her reporting skills onto the life of Harvey Washington Wiley, a heroic and little known American.

As 19th-century America industrialized, Blum reports, so did its food and beverage businesses. In 1862, President Abraham Lincoln created the US Department of Agriculture (USDA). In 1883, in what Blum describes as an unintended revolutionary act, the USDA hired Harvey Washington Wiley as chief chemist. His office began monitoring the nation’s food supply.