Summary of The Power of Place 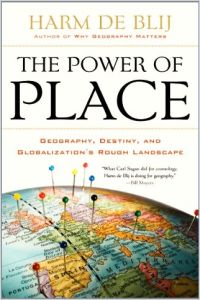 Harm De Blij, a geographer and a philosopher, is passionate about how place shapes a person’s destiny. He parses statistics to fill in details that maps only hint at telling. He employs rich demographic information to illustrate his thesis about the makeup of the current and future Earth. While some of his conclusions are revelatory and might change the way you think and act regarding certain world phenomena, others seem a bit obvious. The book ping-pongs between mind-blowing insights and yesterday’s news. Despite its hills and valleys, it provides a fascinating new take on the world, how it has changed, and how it will change or not. getAbstract recommends De Blij’s worldview to political scientists, investors, health care practitioners, nongovernmental organizations, those who love to collate data, and those who love to study maps and see what revelations lurk within their folds.

Harm de Blij is the author of Why Geography Matters.

Your Place in Place

Place determines so much in your life. Despite the modern myth of the mobile society, the vast majority of the world’s citizens will die in the country of their birth. Most of Earth’s inhabitants will speak the language, wear the clothes, observe the mores, practice the religion, relish the gifts and lament the drawbacks of their nation of origin. Those born in abject poverty will most likely die in it. Billions of people born in poor places suffer more disease, have less available health care and will live shorter lives than the millions fortunate enough to be born in better lands.

Thomas Friedman argues that the Earth is flat, meaning that culture and technology are erasing differences among peoples and nations. But globalization has a terribly unequal reach, and the disparity in access to its opportunities creates worldwide risks. From “rebels...in remote mountain caves” who desire “destructive means once monopolized by superpowers” to floods of immigrants fleeing permanent degradation, the inequities of place have worldwide repercussions.

In fact, most of those who leave their birthplaces are not businesspeople...