Summary of The Power of When 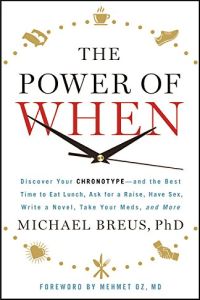 Your internal biological clock oversees the physical systems that determine your sleep and waking times and regulate your energy and attentiveness levels throughout the day. This internal timekeeper evolved when people planned activities around the rising and setting of the sun. People today often live in conflict with their internal timekeepers. Living out of sync with your “bioclock” causes insomnia and fatigue, undermines your health and contributes to mood disorders. Psychologist Michael Breus asserts that realigning your lifestyle with your body’s natural rhythm is relatively simple. Small changes to your schedule, such as altering when you go to bed, when you eat lunch or when you drink coffee, will provide a big payoff in terms of energy, mood and effectiveness. getAbstract recommends his manual to anyone looking to sweep away morning cobwebs or to stay conscious in a post-lunch meeting.

If you’re like most people, your daily schedule is at war with your biological clock. The biological clock consists of a group of nerves called the “suprachiasmatic nucleus,” which regulates the timing of bodily systems that govern sleep, body temperature, metabolism, energy levels, mood, and more.

The biological clock evolved in the distant past when humans’ activities revolved around the daily solar cycle. People awoke at dawn, when the sun’s light activated the release of hormones that enhanced alertness and energy. They were active during the daylight hours. By dusk, they were ready for sleep.

This worked well for 50,000 years. The advent of modern civilization meant that people extended daytime with artificial illumination. Further disruption occurred when airplane travel introduced jet lag. Today, you likely perform activities that conflict with what your body thinks you should be doing. For instance, if you stay awake late into the night, you fight the body’s inclination to release the sleep-inducing hormone melatonin. Research connects “chrono-misalignment” with illnesses such as cardiovascular disease, cancer, obesity and ...