Summary of The President’s Book of Secrets 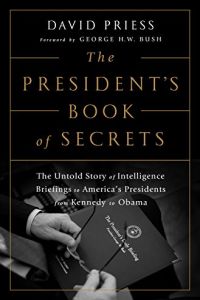 The closely held President’s Daily Brief (PDB) may be the most exclusive “periodical” in the world. The US Central Intelligence Agency (CIA) first produced the brief for President Kennedy and has tailored it to each president since. The PDB is a vital information summary for national security policy makers. Past CIA officer David Priess describes the brief’s history and defends his former agency as he depicts the way each president since Kennedy has used the brief. Priess avoids conclusive observations, but readers will have their own take on how different presidents used this top-secrets resource. getAbstract recommends this insider’s view to those seeking a historical account of how intelligence material moves from the CIA to the president, and how that material affects history.

David Priess served in the Bill Clinton and George W. Bush administrations as an intelligence officer and manager, and as the daily intelligence briefer at the CIA.

In April 1961, the US Central Intelligence Agency (CIA) sponsored a failed invasion of Cuba by a paramilitary army that landed at the Bay of Pigs on the Cuban coastline. This fiasco led President John F. Kennedy to insist on receiving better daily intelligence reports. That gave birth to the President’s Daily Brief (PDB).

The CIA first delivered the President’s Intelligence Checklist, a predecessor of the PDB, on June 17, 1961. Its CIA authors wrote the checklist in more conversational language than the formal jargon of previous intelligence reports. The checklist generated unprecedented exchanges between the president and the intelligence analysis community.

Because the CIA distributed the PDB to a few authorized readers, it could include analysis from sensitive intelligence sources.

During the 14-day Cuban missile crisis of October 1962, Kennedy got most of his intelligence from other sources. The USSR moving missiles to Cuba put the US on the brink of nuclear war. The checklist had given the president information about Soviet arms shipments to Cuba, but didn’t report their type and purpose.

When the Center Held
8
Can It Happen Here?
8
Stillness Is the Key
9
The Age of Agile
8
Cascades
8
The Airbnb Way
7