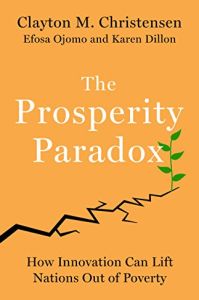 How Innovation Can Lift Nations Out of Poverty

Forget digging wells in poor villages as a way to fight poverty. The real road to prosperity lies in building creative, profitable businesses, argues the late innovation expert Clayton M. Christensen. He and his co-authors, Efosa Ojomo and Karen Dillon, posit that trillions in development dollars sent to struggling nations could be put to better use. It’s a contrarian claim, but the authors manage to support their position without seeming mean-spirited. Their book will inspire business leaders and innovators concerned about poverty in the developing world.

Prosperity has progressed unevenly across the globe.

One billion people have risen out of poverty in recent decades. The raw number sounds impressive, but a more nuanced reading of the data raises red flags. Fully 730 million of those who escaped extreme privation between 1990 and 2015 are in China. Elsewhere on the planet, the misery continues unabated – in fact, in many locales, poverty rates have picked up. In the African nations of Senegal and Zimbabwe, real incomes plunged 53% from the 1960s to 2015; in Liberia, Madagascar and Niger, the decline was more than 60%. According to the World Bank, 750 million people worldwide still subsist on less than $1.90 a day.

The developed world has spent more than $4 trillion on assistance to poor countries since 1960. Yet these well-intentioned investments often fail. Building wells in rural Ethiopia is a classic example: Haunted by images of young girls lugging clean water for miles, fundraisers bring in money to dig wells. The ribbon-cutting ceremony is heartwarming. But what happens in a few months or years, when the well needs repairs? With mechanics and spare parts...

Clayton M. Christensen (1952–2020) was a professor at Harvard Business School, the author of 12 books and the co-founder of four companies. Efosa Ojomo leads the Global Prosperity research group at the Clayton Christensen Institute for Disruptive Innovation. Karen Dillon is the former editor of the Harvard Business Review. 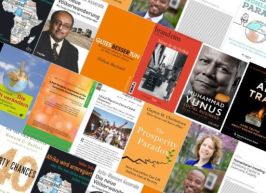