Summary of The Purpose Mindset 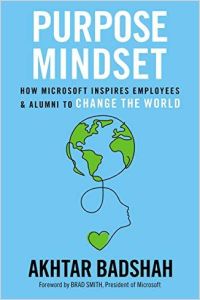 Volunteering and donating to charity are integral to Microsoft’s corporate culture. Akhtar Badshah, who led its philanthropy programs, reports here on employee and alumni charitable projects. He discusses notable Microsoft philanthropists and their projects, including microvolunteering events on Microsoft’s campus,delivering children’s books to developing countries, allowing payroll deductions for charity, and creating campaigns to tackle larger issues, such as racial and social justice. His heartwarming and inspiring stories provide a solid model of corporate social responsibility.

Head of Microsoft’s philanthropy program from 2004 to 2014, Akhtar Badshah chairs the Board of Global Washington and is on the boards of the Microsoft Alumni Network and The IndUS Entrepreneurs, Seattle chapter.

Microsoft encourages its employees to donate to charity through payroll deductions.

Microsoft Corporation’s employees raised $17,000 for the United Way of King County (Seattle) in 1983, their first year of fundraising. The donation included a $1,000 corporate match. Over time, Microsoft upped its match to $10,000 and allowed employees to donate to any registered nonprofit organization. Today, Microsoft’s giving programs amount to $1.8 billion and benefit tens of thousands of nonprofits each year.

In 2002, Microsoft stopped using the United Way as a payroll processor because employees didn’t like its transaction fees and wanted their entire donations to go to their chosen organizations.

In 2000, former Microsoft vendor Kevin Espirito joined the company and volunteered for the giving campaign. He became the VP-appointed lead (VPAL) for this program. His role as a VPAL grew with the company.

Each year, 400 Microsoft VPALs lead volunteer teams in various projects throughout the United States. Espirito urged the company to increase its match to $15,000, which Bill Gates did in 2013 – and that is where...

Hit Refresh
8
The Customer-Driven Culture: A Microsoft Story
9
The Many Lives of Michael Bloomberg
9
Reimagining Collaboration
9
The Curious Advantage
9
The Power of Experiments
7