Summary of The Red and the Blue 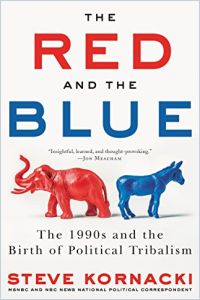 It’s tempting to look at the 1990s as a golden age of American politics. Foreign wars were quick and decisive, economic growth was robust and federal budgets were balanced. But, in fact, it was a decade that set the stage for the current politics of gridlock and discord, journalist Steve Kornacki argues in this detailed recap of the political trajectories of Newt Gingrich – who plays a central role in Kornacki’s tale – and Bill Clinton. Seeking to launch a conservative revolution, Gingrich brought a new brand of bare-knuckle politics to a House of Representatives where compromise had, previously, ruled the day. Kornacki serves up a neutral retelling of the politics of the 1990s, and he barely mentions Donald Trump. But this history leaves little doubt that Trump is a direct descendant of Gingrich, not to mention the tough-talking ’90s figures Ross Perot and Pat Buchanan.

Steve Kornacki is a national political correspondent for NBC News and MSNBC. His work has appeared in The Wall Street Journal, Roll Call and The New York Times.

The deep divide which exists between Red America and Blue America was encapsulated in the presidential election of 2000: a dead heat between George W. Bush and Al Gore that needed weeks to resolve. But the political tribalism, gridlock, showmanship and showdowns which have characterized Washington in the years since did not come out of nowhere. The previous decade set the stage. The 1990s was a comparatively tranquil era: a time of economic growth, a robust job market and rising stock prices. Technological innovation was exciting but not dizzying; social media didn’t exist. America’s military excursions abroad were short and surgical. And the media landscape looked quite different.

Yet beneath the calm, a new brand of politics was taking hold in Washington. The Republicans had won the White House in five of the previous six elections. The Democrats had held the House of Representatives for decades. While the parties battled, compromise was the order of the day. House Minority Leader Robert Michel, a mild-mannered Republican from Illinois, was known for seeking accommodation across the aisle...

Divided Politics, Divided Nation
8
Beautiful Country Burn Again
8
Ship of Fools
8
The Impostors
8
What You Should Know About Politics . . . But Don’t, Fourth Edition
7

The Election That Could Break America
7