Summary of The Revenge of Analog 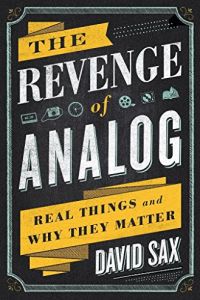 Do you prefer vinyl? Do you love writing with a pen in a blank-paged journal instead of typing away on your laptop? Would you rather play board games around the dining room table with friends than stare alone at a screen? Journalist David Sax explains why. He documents the way that businesses in different fields are swimming against the digital tide and embracing analog technologies. His stories about board game creators, book publishers and watchmakers show how people are rediscovering analog’s virtues. Sax moves between case studies of people working in analog industries or reinvigorating analog work practices, and discussions of larger economic issues. getAbstract recommends his future-oriented look at resurging technologies to anyone interested in the digital economy and the future of work (and play).

Journalist David Sax writes regularly for Bloomberg Businessweek and The New Yorker online. His other books include Save the Deli and The Tastemakers.

Don’t Look Now: Analog is Back

In field after field, analog practices and technologies are making a comeback. As analog returns, people are growing more aware of its virtues. They are moving past the false binary of choosing between digital and analog, and they are learning to appreciate each for its good qualities.

RCA Victor introduced vinyl records in 1933, but it didn’t dominate the music market until after World War II. In 1973, US consumers bought 228 million vinyl singles and, in 1978, they purchased 341 million albums. Then sales declined, first due to eight-track tapes and cassettes, then CDs. Downloads and iPods followed. By 1993, annual album sales fell to 300,000. In 2006, vinyl purchases stalled with, overall, 900,000 sold. But then album sales reversed and began to grow by 20% annually; Americans bought 12 million albums in 2015. When album sales dropped, vinyl’s “infrastructure” remained. The Internet created a widespread niche market for vinyl, which developed “a counterculture cachet.” In 2013 in the UK, consumers between the ages of 18 to 24 were the main purchasers of vinyl records. ...