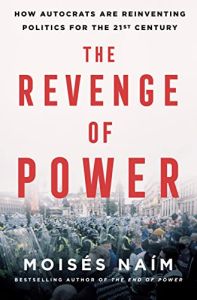 The Revenge of Power

How Autocrats Are Reinventing Politics for the 21st Century

The review below was first published in the getAbstract Journal on Apr 21, 2022.
We’ve reviewed this title for you as we currently cannot offer a summary.

Scholar and journalist Moisés Naím provides an articulate warning about the power of autocrats to undermine democracy.

Moisés Naím – a scholar at the Carnegie Endowment for International Peace and the former executive director of the World Bank – details how ruthless autocrats convincingly pose as selfless populists. In this lucid exposition of the corrosive rise of populism worldwide, Naím eloquently and vehemently asserts that democracies can survive only if they counter each malignant step of autocracy’s advance.

Naím argues that Donald Trump and Vladimir Putin occupy different parts of the same political spectrum: Both are willing to lie extravagantly, and neither brooks dissent nor suffers second-guessing. Naím cites Trump and Putin, as well as the late Hugo Chavez in Venezuela, Viktor Orban in Hungary and Rodrigo Duterte in the Philippines as embracing an innovative formula to gain and consolidate power.

The End of Power

The General Theory of Employment, Interest, and Money