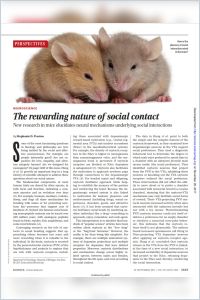 What does meeting an old friend, playing with your child and hugging your dog all have in common? Social interaction. A specific brain circuit is working hard behind the scenes to create and reinforce such interactions. Psychology professor Stephanie Preston evaluates research conducted by Stanford University professor Robert Malenka and his colleagues. It studies mice to understand the brain mechanisms involved in social behavior. The findings suggest that the neuropeptide oxytocin modulates excitability and the release of the neurotransmitter dopamine. getAbstract recommends Preston’s analysis to those who are interested in social interaction and its relation to neuroscience.

Stephanie D. Preston is an Associate Professor of Psychology at the University of Michigan. She uses an interdisciplinary approach to study the decision-making behind food-gathering behavior.

How do scientists use animal models to understand social behavior in humans?

Mating and protecting offspring are forms of social bonding behavior shared by mammals, from rodents to humans. In vertebrates, and even some invertebrates, the “social bonding neuropeptide” oxytocin is a major modulator of social behavior. Stanford University professor Robert Malenka, lead author Lin W. Hung and their colleagues took advantage of this similarity to study the activity of brain cells involved in social preferences.

What is the role of oxytocin in social behavior?

An area of the brain called the hypothalamus produces the peptide hormone oxytocin. Neurons producing ...