Summary of The Riches of This Land 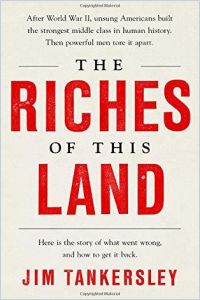 In this intriguing reporter’s notebook on the US economy, Jim Tankersley tells the stories of struggling American workers while mixing in commentary from top economists and executives. Perhaps his most compelling point is that prosperity for marginalized workers means prosperity for everyone. From 1945 to 1978, the US economy was booming – and women and minorities contributed to that growth. But since then, economic opportunity across gender and racial lines has stalled, and the American middle class has gone into reverse. Tankersley’s job as a journalist grants him a front-row seat, and he adeptly diagnoses the rising inequality and shrinking prosperity that ails the US economy and American politics.

The US economy expanded robustly after World War II because new opportunities appeared for women, racial minorities and immigrants.

Theodosia Simpson started work in the 1930s at an R.J. Reynolds plant in Winston-Salem, North Carolina, where employees made cigarettes. Simpson chafed at the low pay and harsh conditions. Workers got no sick days, and production requirements were intense. The work was especially difficult for Black women like Simpson, who had little chance of advancement. In 1943, Simpson and others staged a work stoppage to protest unfair pay and conditions. Their effort yielded a union, along with sick days and paid time off. The Black women of R.J. Reynolds won raises and retirement plans. Their labor action benefited not just them but their white coworkers and Americans of all races.

In the decades after World War II, people like Simpson were able to move into the middle class. Prosperity cut across gender and racial lines, and it was available to workers living in all corners of the country and with varying levels of education. However, the once-broad middle class is shrinking, primarily because elite white...