Summary of The Right Decision 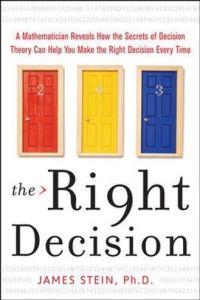 Making decisions is hard, and understanding new theoretical approaches to decision making can be even harder. Mathematics professor James Stein does a fine job of explaining these theoretical frameworks, converting abstract theory to applicable tools and illustrating his explanations with numerous examples. Stein offers many case studies, so readers can apply their understanding of the theoretical tools. But he doesn’t always provide sufficient explanation of the factors involved or the reasoning behind how the decision makers in the scenarios weigh their choices. That aside, this is a useful introduction to a complex subject. getAbstract recommends Stein’s methods to planners, managers, strategists and anyone who wants to make better decisions.

James Stein is a professor of mathematics at California State University and the author of How Math Explains the World.

At some point in your life, you’ll have to make a tough decision. You might have to choose between two risky and complicated medical treatments, for instance, or you may have to select between diverging career paths. The first decision might determine if you live or die. The second might set your future happiness and prosperity. For the best outcome, apply the “branch of mathematics known as decision theory.”

Decision theory derives from mathematics, and its principles rest on sound and tested foundations. You don’t have to know much math to apply decision theory. You simply have to assign numerical values to a few options, and – most of the time – estimate how likely various outcomes might be. The rest involves reasoning based on applying a few core principles.

A decision has three main stages: First, you face a situation that requires a decision. This can range from having to select a restaurant to deciding which way to jump when a tiger leaps at you. Second, you “lay out a bunch of alternatives,” and, third, you “choose among the alternatives.” That third step involves action: You go eat at your restaurant of choice, or...