Summary of The Rise of Superman 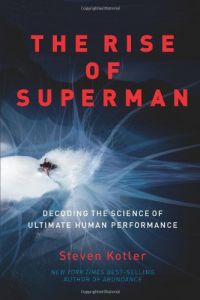 Steven Kotler is the co-founder and director of research for the Flow Genome Project. He is a best-selling author whose other books include:West of Jesus, A Small Furry Prayer, Tomorrowland, Bold and Abundance.

Elite athletes achieve remarkable feats in traditional sports. In 1996, for example, Kerri Strug secured Olympic gold for the US women’s gymnastics team under intense pressure in the final event of the competition. She won by performing a difficult vault ending in a perfect, “stuck” landing on an ankle she had sprained on her previous attempt.

Unlike Strug, skateboarder Danny Way is an “action-adventure sports athlete.” He became the first person to jump the Great Wall of China on a skateboard and placed second at the 2004 X games. He did both on a twice-broken ankle under conditions that make most contact sports look like games of checkers. Such extreme athletes push the envelope in action-adventure sports. Athletes who engage in “BASE jumping” and or wing-suit flying know they are risking death. People involved in these sports enter “the zone,” a mental and emotional state where time slows and a sense of serenity obscures danger.

Getting in the Zone

In the zone, you achieve a different form of consciousness. If you’ve been in a life-threatening situation, perhaps you’ve experienced this consciousness. Time slows down. The things...