Summary of The Road to Global Prosperity 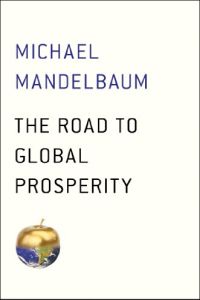 The 2008 recession created little international political fallout save renewed commitment to democratization and openness in once-closed societies. Global trade continued apace. Michael Mandelbaum therefore argues that global capitalism has taken root, a trend he finds virtuous. Aside from his intriguing high-level conclusions, Mandelbaum – co-author of That Used to Be Us with Thomas Friedman – doesn’t break new ground; instead, his purpose is analysis. He limns the causes of recession, the euro crisis and the emergence of Brazil, Russia, India and China. Caveat: The book came out before Russia’s actions in Crimea, which clearly challenge some of its related conclusions, but otherwise getAbstract recommends Mandelbaum’s ideas to investors and policy makers seeking insight into the broader forces shaping the world economy today and tomorrow.

Michael Mandelbaum, author of That Used to Be Us with Thomas Friedman, directs American Foreign Policy at The Johns Hopkins School of Advanced International Studies.

The Top Priority in International Affairs

Economic growth isn’t dead. The recession and the euro crisis hit hard in the United States and Europe, but the emerging markets of Brazil, Russia, India and China, that is, the BRIC nations, grew. The global trend of economic growth from 1991 to 2008 took a break for a time but then continued, as economic expansion proved the most likely path for world markets. Prosperity must keep going – it governs the health and safety of the world’s seven billion people.

Pursuit of wealth can be a cooperative and mutually beneficial endeavor. Power struggles end with winners and losers; economic expansion creates winners on all sides. The money generated by international trade boosts living standards, fosters political stability and creates an incentive for adversaries to get along.

The 21st century will be an era of relative peace and democratic capitalism. A new mind-set of “war-aversion” avails; it’s better to trade and invest with your rivals than to make war. Weaponry advances have also raised the stakes of war. Advanced nations can easily kill many people and are less willing to do so. Yet war has not disappeared. Conflict ...