Summary of The Road to Serfdom 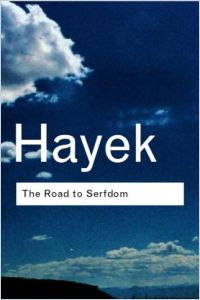 Friedrich A. Hayek, an Austrian economist, wrote this classic defense of democracy and market economies in 1944. That it remains a bestseller is a testament to the thoughtfulness and thoroughness of his critique of socialism and centrally planned economies. Hayek cites the influence of Karl Marx and other German philosophers who primed citizens to embrace Hitler's totalitarian rule. The Great Depression of the 1930s stepped up questions about capitalism and boosted support for socialism in democratic countries. But Hayek warned that citizens of democracies put their freedom at risk when they extolled the goals of socialism. This edition of Hayek’s classic includes an introduction by the book’s editor, ample annotation of the text and an appendix with related documents, as well an introduction by monetary policy expert Milton Friedman. Readers who want to know the seminal works in this field and to explore the philosophical differences between socialism and capitalism should know this work.

Friedrich August von Hayek (1899-1992), an economist from Vienna, Austria, and a proponent of market-based economies, was co-winner of the Nobel Memorial Prize for Economics in 1974 and recipient of the US Presidential Medal of Freedom in 1991.

Doubts About Democracy and Capitalism

In the early decades of the 1900s, Europeans and Americans increasingly considered alternatives to democratic government and capitalism, especially during the terrible economic depression in the 1930s. Many critics questioned the “liberal,” or minimal, style of government that democracy fostered and wondered if socialism might deliver better results.

These were dangerous daydreams. For market-based economies like those of America and Great Britain, a full turn toward socialism would require abolishing property rights and adopting a centrally planned economy, sharply cutting the scope of individual decision making. True, many supporters of socialism and other types of totalitarian rule have societal goals similar to those of democracy, but socialism’s pious objectives fail to justify its punitive means of achieving them.

Few countries integrated socialism into their governance to a greater extent than Germany did in the 50 years prior to the pivotal 1930s, when Adolf Hitler rose to power. German philosopher Karl Marx died in 1883, but his revolutionary belief in socialism and central economic planning lived on, attracting...

Law, Legislation and Liberty
8
Bottom-up Responses to Crisis
8
The Power of Creative Destruction
8
The Future Is Asian
9
Move Fast and Break Things
8
Inventing the Individual
8