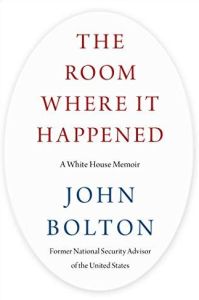 The Room Where It Happened

The review below was first published in the getAbstract Journal on Aug 10, 2021.
We’ve reviewed this title for you as we currently cannot offer a summary.

A Tell-All from “Inside a Pinball Machine”

John Bolton, former national security adviser to President Donald Trump, also served as the US ambassador to the United Nations and held positions in the Reagan, George H.W. Bush and George W. Bush administrations. Trump sued to block publication of Bolton’s book but, given the spate of former Trump officials’ tell-alls, Bolton’s insider nuggets are no longer quite as shocking as they once were.

Comedian Stephen Colbert summed up initial reaction to the information in Bolton’s memoir by saying, “I can’t believe I’m saying this: It’s worse than I even imagined.” The New Yorker called this “a scathing and revelatory account…indispensable, jaw-dropping and specific.” And The Washington Post found this “the most substantive, critical dissection of the president from an administration insider.”