Summary of The Russian State and Russian Energy Companies, 1992–2018 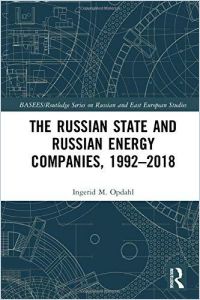 The Soviet Union’s economy was a monolith, not divided into separate companies. After it collapsed, Russia underwent a slow, gradual and painful process of transforming a centralized economy into one governed by private markets. Now, Russia’s power derives from its energy revenues, and its stature in the world’s energy supply lets it leverage those resources in global politics. The government’s informal, often personal, relationships within the energy sector shape foreign policy, but also contribute to political weakness. Professor Ingerid Opdahl’s delineation of tangled issues can be dry, but she shows how Russian power has emerged and explores the role its energy companies play in that advance.

Ingerid M. Opdahl is associate professor at the Norwegian Institute for Defence Studies (IFS) at the Norwegian Defence University College. She heads the IFS’s Russian Security and Defence Programme.

The Russian state’s power and status derive from energy resources.

Russia’s current stature as a major political player, both globally and among neighboring states, derives largely from energy, especially the oil and gas supplies it controls. After the collapse of the Soviet Union in the early 1990s, Russia exerted little international authority or power. However, during the presidency of Vladimir Putin, energy resources have delivered the revenues necessary to assert “global power status.”

Since the end of the Soviet Union, Russian state policymakers have recognized that its energy resources provide foreign policy leverage. Holdovers from Soviet economic policy enabled Russian energy companies to exert influence over regional post-Soviet states. Indeed, in the immediate aftermath of the USSR’s collapse, energy companies proved pivotal in an otherwise depleted Russian state. Energy companies could take this role because the nation’s lack of developed institutions in this area enabled loose, unregulated relationships between government and business. However, today, these unstructured and unregulated corporate...