Summary of The Secret History of Food

Ecco, 2021
THE SECRET HISTORY OF FOOD: Strange but True Stories About the Origins of Everything We Eat by Matt Siegel. Copyright © 2021 by Matt Siegel. Published by arrangement with Ecco, an imprint of HarperCollins Publishers.
ISBN: 9780062973214
Pages: 288 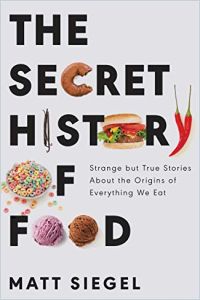 Academician Matt Siegel takes a scholarly, irreverent approach to the role of food, from ancient times to the present. A terrific writer with a wicked sense of humor, Siegel uncovers the origins of gastronomic staples such as apple pie, ice cream, corn flakes and honey. He uses historical and scientific documentation to weave fascinating, often surprising narratives. For instance, would you ever have guessed that people once used bees and honey as weapons in warfare? Treat yourself to a delicious learning experience.

Former English professor Matt Siegel has written about food and culture for The Atlantic, Fast Company and The Paris Review.

You are what your parents ate.

Decades before modern science confirmed his beliefs, food writer Jean Anthelme Brillat-Savarin discussed the relationship between obesity and refined carbohydrates, and promoted the advantages of a low-carb diet. In his 1825 book Physiologie du goût (Physiology of Taste), he warned against children drinking coffee, and suggested that food choices define you physically as well as “psychologically, socially, symbolically and spiritually.”

Contemporary research indicates that the foods your parents consumed may influence your tastes. For example, a mother who loses sodium because of chronic morning sickness can set off an increased desire for salt in the fetus, resulting in an overcompensation that persists throughout life.

Flavors from a mother’s diet that are present in breast milk and amniotic fluid also shape food preferences. Breastfed babies often enjoy a greater variety of foods than infants who consume formula, likely because the mother’s diet is more varied and flavorful. Humans who receive exposure to nutritionally poor diets in the womb have...