Summary of The Senkaku Paradox 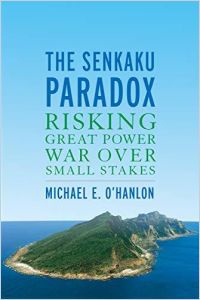 Could small acts of aggression undermine the post-WWII world order? In this well-researched and detailed work, foreign policy expert Michael O’Hanlon explores how seemingly minor political incidents – such as the Chinese deciding to occupy a handful of uninhabited islands in the East China Sea – could escalate into significant global conflicts. O’Hanlon makes the case that the United States and its allies must prepare an “asymmetric defense” strategy – comprising both economic and military tactics – in order to properly evaluate and respond to these sorts of risks.

Michael E. O’Hanlon’s previous books on global security and US defense include The Future of Land Warfare and Beyond NATO: A New Security Architecture for Eastern Europe. He works at the Brookings Institution, where he is a senior fellow in foreign policy.

The ongoing conflict over a small archipelago in the East China Sea is emblematic of the “Senkaku Paradox.”

Five uninhabited islands and three rocks that don’t count as islands stand in the midst of the East China Sea. Japan calls this tiny archipelago the Senkaku Islands. In China, they are called the Diaoyu Islands. Ownership of this land is an ongoing source of conflict between the two countries. It may seem like a low-key squabble, but the contested islands are illustrative of a larger problem: how the United States could or ought to respond should a small, highly localized attack against an ally – or ally-controlled territory – occur.

China would probably never dream of invading mainland Japan, but it could, easily choose to take possession of the Senkaku/Diaoyu islands. In the event this action did occur, how should the United States react? Too strong of a response risks escalation; but to turn a blind eye to China’s aggression would mean ignoring promises to help defend America’s ally, Japan, and, by extension, the existing world order. Thus, the paradox. Knowing how a dispute over these unlivable...

The Taiwan Temptation
9
Is Taiwan the Next Hong Kong?
8
Global Risks 2035 Update: Decline or New Renaissance?
8
The Shadow War
8