Summary of The Shadow World 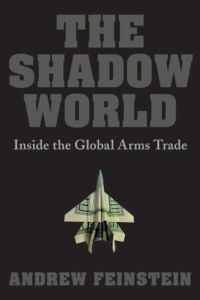 In this compelling critique, corruption watchdog Andrew Feinstein argues that the military-industrial complex is riddled with corruption and bribery. Feinstein outlines the sordid history of arms deals in recent decades, focusing on dubious deals involving Saudi Arabia and South Africa. The author makes his biases clear but still serves up a detailed, thought-provoking exposé of the underworld of big-time weapons sales. He supplies the dates, the names and the numbers, leaving little doubt of his veracity or tenacity. Dick Cheney fans won’t like Feinstein’s conclusions, but others should approach them with an open mind. getAbstract recommends this well-researched muckraking report to those intrigued by the worldwide trade in arms.

Andrew Feinstein is the author of After the Party, a political memoir. He is an Open Society Institute Fellow and the founding co-director of Corruption Watch in London.

Guns, bombs and fighter jets are big business. The annual global arms trade ballooned by 53% from 2000 to 2010, growing to $1.6 trillion, or $235 for every person on Earth. This little-regulated, murky world is filled with bribery, double dealing and shady characters. Arms dealing, a secretive corner of capitalism, makes up more than 40% of all corruption in world trade. The United States is the biggest fish in the international weapons trade, but Russia, Britain, France and Germany are also major players in the production and trade of war matériel.

Spending on arms is a boon to first-world arms manufacturers such as BAE Systems in Britain, and Lockheed Martin and Pratt & Whitney in the United States. These companies cloak their operations with a veil of economic development and high-paying jobs. The weapons trade also proves a money machine for dealers such as Viktor Bout, the now-jailed “merchant of death.”

The trade is catastrophic for the poor people of Africa, who find that the arms get pointed at them, or that their governments spend money on weapons that should go to basic health care. Governments and industry...