Summary of The Shape of Work to Come 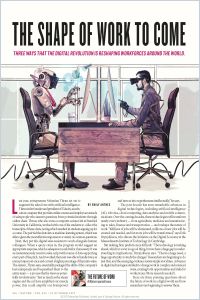 The digital revolution is transforming the work environment at a rapid pace, requiring organizations and job seekers to adapt. However, questions remain as to how exactly workplaces will change, and who will benefit. Science journalist Emily Anthes focuses on three key areas: Machine learning, the gig economy and the digital skills gap. Research findings offer insight of how these regions of the digital world might shape and ultimately transform the future of work and the economy.

Emily Anthes is a science journalist in New York City.

Self-taught machines won’t replace, but will complement, the work of humans.

Due to their ability to learn on their own, machine learning systems may take over the work of highly skilled people such as accountants, lawyers and physicians. A team of researchers at the Oxford Martin Programme on Technology and Employment predict that automation threatens 47% of the jobs in the United States.

However, Ulrich Zierahn from the Centre for European Economic Research in Mannheim, Germany, corrected that number down to 9%. He found that many jobs considered at risk of automation involve a lot of personal interaction...

The Globotics Upheaval
9
Reprogramming the American Dream
8
Tools and Weapons
10
The Algorithmic Leader
8
The AI Organization
8
Are Robots Competing for Your Job?
9

AI in the Workplace
Gig Economy
Future of Work