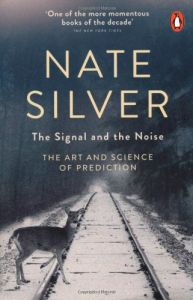 The Signal and the Noise

The Art and Science of Prediction

The review below was first published in the getAbstract Journal on Apr 29, 2021.
We’ve reviewed this title for you as we currently cannot offer a summary.

Statistician and founder of The New York Times political blog FiveThirtyEight.com, Nate Silver explains predictions and tells you when to trust them – especially your own.

Silver’s singular combination of rigorous, imaginative research, daring predictions and refusal to take himself seriously – though he is dead serious about his results – led to uniformly positive reviews for his book. The New York Review of Books called this, “One of the more momentous books of the decade… A serious treatise about the craft of prediction – without academic mathematics – cheerily aimed at lay readers.” The Wall Street Journal wrote, “Mr. Silver’s breezy style makes even the most difficult statistical material accessible.”