Summary of The Sixth Extinction 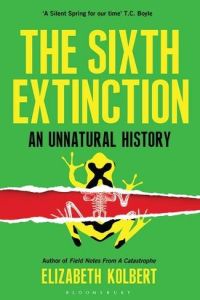 An asteroid slammed into Earth 66 million years ago, wiping out dinosaurs and decimating birds, mammals, plants and marine life. As New Yorker writer Elizabeth Kolbert reports, that was the fifth time in 500 million years that events almost eradicated life on Earth. The planet is now suffering a “sixth extinction,” but, she writes, this time human beings are the agents of mass destruction. People transform the world with cities, roads and farms; cut down forests; and fill the atmosphere and oceans with unprecedented levels of carbon dioxide. Whole classes of amphibians, birds, mammals and reptiles are on the road to annihilation; the world’s coral reefs may disappear by the end of the 21st century. Kolbert doesn’t sugarcoat her distressing content. She’s a terrific writer who leavens the darkest topics with restrained humor and illuminating stories. While always politically neutral, getAbstract recommends her warning call to policy makers, students, investors and business leaders who are concerned about humanity’s unique position in nature’s balancing act.

New Yorker staff writer, Elizabeth Kolbert wrote Field Notes from a Catastrophe: Man, Nature and Climate Change and The Prophet of Love: And Other Tales of Power and Deceit.

The history of life on Earth alternates long spans of massive slow change punctuated by periods of catastrophic transformation. Normally, change comes so slowly that it remains imperceptible. Species adapt to shifting environments over innumerable generations and go extinct just as gradually. But fast, drastic planet change leaves organisms no time to adapt. For example, Earth changed in an instant 66 million years ago when a six-mile-wide asteroid crashed into the planet near Mexico and wiped out vast amounts of life, including the dinosaurs. This was the most recent of five “mass-extinction events” over the past 500 million years. Today, the planet faces a sixth extinction. Now the agent of destruction is humanity itself.

In 1739, a group of soldiers camping near the Ohio River discovered a marsh filled with gigantic bones. The men carried away a 3.5-foot femur, a colossal tusk and teeth weighing10 pounds each. At the time, science had no concept of extinction. Naturalists assumed that the organisms then alive were the only ones that ever lived. They could not classify the unusual bones from Ohio. In 1796, French...