Summary of The Small Big 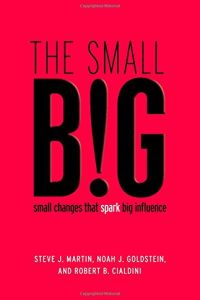 Using persuasiveness to alter another person’s behavior doesn’t require a monumental effort. Little things often foster the biggest shifts. As United Kingdom-based behavioral scientists and professors Steve J. Martin, Noah J. Goldstein and Robert B. Cialdini demonstrate, minor changes in everyday life can yield significant changes in the way people act. Drawing from an abundance of scientific research, they provide intriguing insight into human behavior and offer telling examples of how to alter other people’s actions. getAbstract recommends this fascinating educational experience to managers, marketers and anyone who needs to persuade.

Arizona State University professor emeritus Robert B. Cialdini is president of UK-based Influence at Work, where Steve J. Martin is the director. Noah J. Goldstein is a professor at the UCLA Anderson School of Management. They also co-wrote Yes! 50 Scientifically Proven Ways to Be Persuasive and Cialdini also wrote Influence: The Psychology of Persuasion.

If you believe that you must mount a major campaign and spend lavishly to change the behavior of your staff or customers, think smaller. Little tweaks in how you present information, how you frame the action you wish to encourage and how you suggest that people view each other can bring about significant shifts in behavior. However, these desirable changes in behavior don’t result from random acts. A communicator can make a message more effective by making deliberate but minor strategic adjustments. You can change the way people behave without spending time, money or effort. For big changes, take small steps, as in the following examples.

Right on the Money

For years, officials in Her Majesty’s Revenue & Customs (HMRC) department in Great Britain used a traditional approach to coax citizens to pay their taxes on time, including assessing late fees, charging interest and taking legal measures. But in 2009, HMRC collected roughly 30% more than in 2008. It added a single sentence to its correspondence, telling recipients about the sizable number of people who remit their taxes promptly.

By adding this fact, HMRC capitalized on the...