Summary of The Smarter Screen

Portfolio, 2015
© 2015
From THE SMARTER SCREEN by Shlomo Benartzi. Summarized by arrangement with Portfolio, an imprint of Penguin Publishing Group, a division of Penguin Random House LLC
ISBN: 9781591847861
Pages: 256 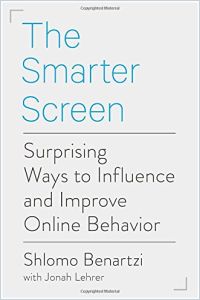 People spend more time than ever interacting with screens, and they behave differently online than they do in the physical world. You’re likely to spend more money shopping online via your smartphone than you would in the store or shopping on your home computer. Various factors that affect on-screen behavior enable people to process and retain digital information more effectively and to make smarter online decisions. Behavioral economist Shlomo Benartzi conducted extensive research into online behavior and offers suggestions to help you make smarter choices. He is an articulate writer and diligent researcher – at times, too diligent. Although navigating Benartzi’s labyrinth of research studies takes patience, the results are worthwhile. getAbstract recommends his conclusions to online business managers, website architects and web consumers.

Author of Save More Tomorrow and Thinking Smarter, Shlomo Benartzi is a behavioral economist and co-chair of the Behavioral Decision-Making Group at UCLA.

The US government launched healthcare.gov in 2013 to help millions of uninsured Americans choose the right health insurance coverage. The site offered a multitude of choices, including 47 insurance plans. Most people chose poorly, spending an average of $888 more than necessary.

On February 21, 2010, a US drone tracked a pickup truck and two SUVs traveling in Afghanistan. Military analysts watched its video feed and monitored related radio chatter and instant messages. They concluded that the convoy was a threat and killed 23 innocent civilians. Both times, an excess of digital data overwhelmed people trying to make good choices. Digital overload affects people in other types of organizations as well, like hospitals and financial institutions.

Jessica Seinfeld used Uber during a snowstorm in New York City. She was aware of Uber’s surge pricing policy, but the $415 charge took her by surprise. The ease of using the Uber app caused her to react so quickly that she failed to absorb the surge pricing information.