Summary of The Smartest Places on Earth 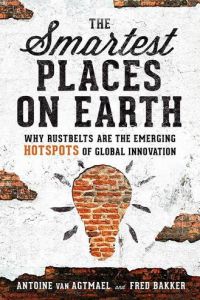 Residents can transform languishing rust belt towns into thriving hubs of innovation, according to authors Antoine van Agtmael and Fred Bakker. They depict communities worn down by economic decline that reinvent and revive themselves as “brainbelts.” Community leaders and those who provide adjunct services – attorneys, cultural resources, designers, marketers and investors – will appreciate these local sagas. Inquisitive readers should flip back to the “notes” section, where the authors include data and background materials. This insightful guide is a big hand up for anyone who believes in the productivity of the “multidisciplinary sharing of brainpower,” including entrepreneurs, inventors, higher education administrators, local government officials, and managers or owners of established and start-up companies.

Of Rust Belts and “Brainbelts”

The town of Akron, Ohio, once the world leader in tire manufacturing, suffered as jobs moved overseas. It became a rust belt town, one of many declining “former industrial citadels…hit hard by offshoring.”

To revitalize its commercial life, Akron launched a major turnaround, becoming a hub for polymers and new materials. Akron now boasts 10,000 manufacturing businesses, including 1,000 start-ups, that employ more people than the four major tire producers did during the city’s glory days.

Akron and other towns and regions in the United States and Europe have become “centers of innovation and smart manufacturing" called "brainbelts.” Each one demonstrates practices and principles other regions can adopt and tailor to their own strengths to re-emerge on the global stage. “Brainsharing ecosystems” can revitalize stale areas and generate income, jobs and positive attention.

Brainbelts are tightly knit ecosystems that “involve specialized technical research and high complexity.” Each focuses on a single – or just a few – economic goals and builds a culture of sharing. The presence of universities differentiates ...