Review of The Soul of America 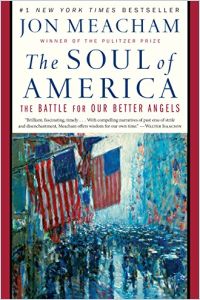 Historian Jon Meacham looks at America’s Trump-era politics of rage and resentment and sees a straight line to the past. In this study of American domestic strife, Meacham argues that the nation has often fallen into dark times; yet it has always reemerged, thanks in large part to the heroic actions of its presidents. He sees Abraham Lincoln, Theodore Roosevelt, Franklin Roosevelt and Lyndon Johnson as titanic figures who appealed to what Lincoln called Americans’ “better angels.” None of the men were completely idealistic, Meacham reports. Even Lincoln was willing to tolerate slavery, for a time. The measure of a hero, Meacham argues, is not perfection but a willingness to fight for what’s right. This compelling overview of American political history reframes familiar events in a new way.

Jon Meacham is a Pulitzer Prize-winning historian whose subjects have included Thomas Jefferson, Andrew Jackson and Franklin Roosevelt. He is a distinguished visiting professor at Vanderbilt University.

The “Politics of Fear”

American politics, Meacham holds, is a constant battle between fear and hope. Fear is emotional and irrational; it seeks to cast blame. Hope is optimistic and unifying. Throughout American history, racism, nativism, isolationism and populism have prevailed numerous times. During these periods, populists stoke fear, finding racial groups or religious sects to scapegoat. The 2016 election of Donald Trump, in Meacham’s view, marks a return to such “politics of fear.” When, for example, a woman died while counter-protesting a group of neo-Nazis in Charlottesville, Virginia in 2017, Trump responded to the events by insisting there had been “hatred, bigotry and violence on many sides.” This line of rhetoric; the author writes, appealed to white nationalists such as David Duke, the former grand wizard of the Ku Klux Klan (KKK).

Troubled as Meacham is by Trump’s comments, he views as even more fearsome the general mood of bitterness and resentment that has settled over the American electorate. Today, he observes, the United States is in a period of economic malaise and social upheaval: circumstances which set the stage for extremism. Yet, history shows, such dark times don’t last forever. Americans find a way to get back in touch with what Abraham Lincoln called “the better angels of our nature,” and to embrace hope over fear. As a result, American democracy has, repeatedly, reemerged intact and more robust than before. The American president plays a crucial role in times of angst and worry. A president acts as a powerful role model for the rest of the nation. In the past, Meacham writes, presidents have endeavored to exert a calming influence, to show grace in times of stress. Trump, however, he sees as an exception; unlike his predecessors, he voices no calls for unity or tolerance.