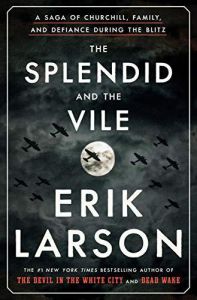 The Splendid and the Vile

A Saga of Churchill, Family, and Defiance During the Blitz

Eric Larson’s intimate retelling of the Battle of Britain brings the nation’s rulers, aristocrats and ordinary citizens to vivid life.

Bestselling author Erik Larson specializes in tales of individuals living through 20th century history. If he’s not depicting a diplomatic family in Berlin during Hitler’s rise – In the Garden of Beasts – he sets the inventor of the “wireless,” Guglielmo Marconi, against an ocean-wide manhunt for a murderer in Thunderstruck. Or he evokes history through multiple intensely researched portraits, as in Dead Wake – his depiction of the sinking of the Lusitania in World War I. Larson writes with great narrative drive, as in The Devil in the White City.

He uses social interactions – not recitations of facts – to bring to life the idiosyncrasies of each age, like the depiction of life in Galveston in 1900 in Isaac’s Storm. At times, the author seems at a disadvantage here because Winston Churchill’s story is well-known, but Larson’s sense of telling detail makes this a fascinating read.