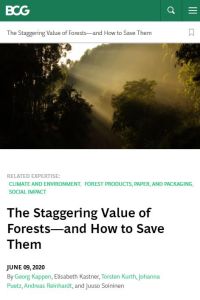 Few will argue that forests aren’t nice things, but is protecting them really all that important? Shouldn’t policymakers focus on more pressing issues, like the economy? This special report from the Boston Consulting Group explains why the threat of deforestation matters, both ecologically and economically. According to the report’s findings, even if you disregard the intangible benefits of forests, like the fond memories created during family trips to national parks or the cuteness of an endangered tree owl, the benefits provided by the world’s forests are overwhelming, and worth saving.

Georg Kappen, Elisabeth Kastner, Torsten Kurth, Johanna Puetz, and Andreas Reinhardt work in the Berlin offices of the Boston Consulting Group. Juuso Soininen is a Partner and Associate Director in the Helsinki office.

A conservative estimate places the value of the world’s forests at between $50-$150 trillion dollars.

There are about 4 billion hectares of forest in the world today, covering about 30% of the world’s land area. Though it sounds like a lot, humans are reducing those numbers by the equivalent of 40,000 soccer fields per 24-hour period, or about 30 soccer fields every minute. This represents a massive loss on many levels: beauty, biodiversity, clean air and water, people’s livelihoods and economic value.

It is difficult to quantify the value of forests. The commercial benefits are more tangible, especially in areas like Asia and Africa where a good portion of people count on the forest for their livelihoods. Unquantifiable variables, such as psychological and emotional benefits, prevented carbon emissions or the value of biodiversity, do not feature in the current analysis. The report’s estimates only includes figures confirmed by academic consensus.

How The World Got Hooked On Palm Oil
8