Summary of The Starbucks Experience 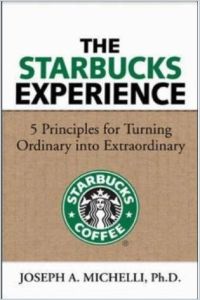 Starbucks executives claim that the company's customer-friendly, socially responsible policies amount to a new business model, and author Joseph A. Michelli generally agrees. Certainly the company has been innovative and wildly successful. Unfortunately, Michelli's decaffeinated, artificially sweetened account of Starbuck's retailing prowess often reads as though the writer is giving a boost to the company's PR department – and the book cover design doesn't help, with its Starbucks signature colors, logo (dutifully trademarked, as is every mention of every cup of Frappucino) and inset of the brown, corrugated paper the company uses for cupholders. Some of Michelli's examples of Starbucks' caring policies are banal – opening early or providing a free cup of tea are not major innovations, nor are they transferable examples. Yet the book usefully illustrates how far good service and community relations can go. Each chapter provides a readers' guide and sidebars about how to apply Starbucks principles to your business. getAbstract recommends sipping it for applicable tips and interesting stories.

Joseph A. Michelli is the founder of a training, consulting and keynote presentation company. He hosts a daily radio show in Colorado.

In 1971, Starbucks Coffee, Tea and Spice opened in Seattle, where it attracted customers by giving them more than the usual free refill on a 50-cent cup of burnt coffee. Unlike other chains, it offered high-quality beans, careful preparation, attractive store and product design and "the charm and romance of a European coffeehouse." Since then, the company has opened 11,000 stores in 37 countries. Some 35 million customers visit Starbucks weekly and some of its best customers come in as often as 18 times per month. Today, Starbucks buys about 4% of all the coffee sold worldwide.

Starbucks went public on the NASDAQ in 1992. The company has grown so much that if you had invested $10,000 then, it would be worth $650,000 today – and Starbucks continues to expand. It opens a new store somewhere in the world every day of the year. Starbucks has 500 stores in Japan, including the busiest Starbucks in the world, in Tokyo. In some places, it has opened stores across the street from one another.

Every store is company-owned; none are franchised. Starbucks' successful growth formula includes focusing on its employees, its products, the experience of...