Summary of The Stuff of Thought 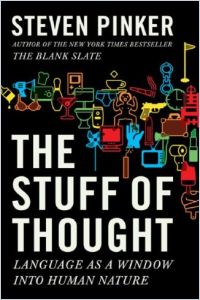 Steven Pinker’s enthusiasm about language comes through everywhere in this book – which is a good thing, because the subject matter itself is dense and complex. This combination results in a curious reading experience: Pinker’s lively style, many anecdotes and extreme lucidity pull you forward in the text, but the difficulty of the questions he raises could stump you for some time. He explores many linguistic theories in such depth that readers without a particular interest in the field may, frankly, get lost or find the book too abstract, despite Pinker’s numerous attempts to ground his discussions in reality. Therefore, while this is a fine book, getAbstract recommends it primarily to patient readers who have a strong interest in language and philosophy. Bring along an open mind and a sense of humor, since Pinker explores language practices – such as obscenities and insults – that may provoke emotional responses.

Steven Pinker teaches psychology at Harvard, and is the author of The Language Instinct, How the Mind Works and The Blank Slate, a Pulitzer Prize finalist.

On September 11, 2001, terrorists flew a plane into one tower of the World Trade Center in New York City. A few minutes later, they flew another plane into the other tower. This sweeping tragedy changed the course of history – but was it one event or two? The question might seem odd, given the scope of the disaster, but for at least one person affected by the attack, it is a good example of the importance of the fit between language and reality. Larry Sunstein, who held the lease for both towers, had insurance against catastrophes. Specifically, he was insured for distinct events, so the question of whether 9/11 was one event or two is not academic to him. The answer is worth more than $3 billion. It exemplifies the kinds of semantic problems that humans constantly confront, issues arising from the vexed relationship between language and reality.

The relationship is challenging because no intrinsic tie exists between a word and its referent. There’s no reason to call a particular animal a “cat” in English or a “chat” in French. Yet, each word has strong historical associations for its users. What’s more, the metaphors that abound in language express...