Summary of The Stuff 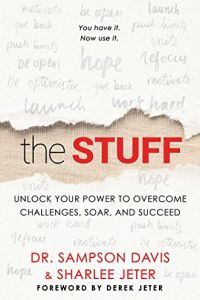 A young woman wanted to be a doctor, but couldn’t get into a US medical school. A Cuban medical school accepted her, but she couldn’t read or speak Spanish. She began medical training the day she began studying Spanish. She graduated within five years and is now a physician. Authors Sampson Davis and Sharlee Jeter attribute her success to her having “the stuff.” They discuss the essential elements of this level of fortitude and share stories about people whose stuff enabled them to overcome life’s challenges.

Sampson Davis, MD, is an emergency room physician, public speaker, philanthropist and the youngest physician to receive the National Medical Association’s Scroll of Merit. Sharlene Jeter is the president of the Turn 2 Foundation, whose programs motivate young people to turn away from drugs and alcohol.

Life is tough. To stay on top of it, you need “the stuff.”

As a college student, author Sharlee Jeter found the courage and strength to overcome Hodgkin’s lymphoma, a life-threatening disease. She is now president of the Turn 2 Foundation, which motivates young people to turn to a healthy lifestyle and away from drugs and alcohol.

Co-author Sampson Davis is an emergency room physician and co-founder of the Three Doctors Foundation, which provides free programs on education and health. He grew up in poverty in one of the worst crime-infested neighborhoods in Newark, New Jersey.

As a teenager, Davis spent time in jail because he participated in an armed-robbery attempt against supposed drug dealers. Since then, he’s led an exemplary, inspiring life.

Jeter and Davis believe in the transformative power of the stuff, which they define as “a cultivatable inner fortitude” that people muster to overcome challenges. They share stories of people who used the stuff to triumph adversity. Each story focuses on a single essential element of the stuff.