Summary of The Synergy Trap 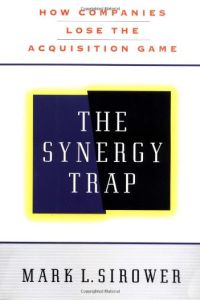 Mark L. Sirower’s thought-provoking and complex book is actually a critically acclaimed academic study that challenges the reasoning behind corporate acquisitions. Pointing out that acquisitions usually devalue the acquiring companies (a loss from which they rarely recover), Sirower delves into management fundamentals and mathematical analyses to get to the bottom of merger and acquisition problems. Three detailed appendices feature plenty of financial calculations, performance measures and data from various corporate acquisitions to back up his assertions. getabstract.com recommends this book to those involved in mergers and acquisitions and to other readers intrigued by the inside view of this "carnivorous quest."

Mark L. Sirower is a corporate development advisor with The Boston Consulting Group and a visiting professor at New York University’s Stern School of Business. He consults with major corporations on merger and acquisition decisions. The Synergy Trap is based on his ground-breaking Columbia University doctoral thesis, which first gained national attention when it was cited in BusinessWeek. He lives in Manhattan.

Acquisition activity has climbed into the trillions of dollars and remains the favorite corporate growth strategy of this generation of executives, despite the very real fact that shareholder value is a casualty of most acquisitions. Despite decades of research and billions of dollars paid to advisors and consultants, these acquisition decisions continue to destroy the value of the acquiring companies. The big question, given that they don’t work financially, is, "Why do these ludicrous acquisitions continue?"

Companies often pay too much in their quest to acquire other companies, and then never see the promised increases in performance and competitiveness. Extensive evidence now shows that the acquisition premium doesn’t represent potential value, despite the long-held popular notion that acquisitions are the way to grow and profit.

Synergy represents the specific increases in performance beyond those already expected for companies to achieve independently. In other words, synergy represents all the performance increases you expect when you put the original company together with the one or more involved in an acquisition or merger. This ...