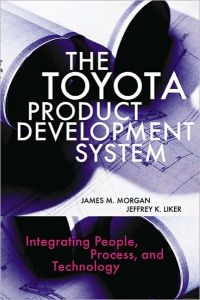 The rise and global success of Toyota inspired vast numbers of studies, articles and books on the company’s production system and culture. The authors show how the Japanese auto maker’s system for developing products has contributed to its success. James Morgan and Jeffrey Liker explain Toyota’s insistence on starting projects correctly, applying the best resources to them in a timely fashion and terminating wasteful processes that provide no customer benefit. The authors also portray Toyota’s approach to technology, project management tools, communication and corporate culture and compare Toyota to American auto makers. While this book is most useful to those involved in manufacturing product development, especially engineers and their managers, getAbstract recommends it to anyone who is fascinated by the world’s largest automaker and wants to learn about its integrated approach to creating cars.

James M. Morgan, Ph.D., has spent more than 24 years in automotive operations and development. He has published numerous articles and taught at several prestigious institutions. Jeffrey K. Liker, Ph.D., has written or co-written seven books, including the international bestseller The Toyota Way, and more than 70 articles. He is a professor at the University of Michigan.

A Culture of Constant Improvement

Toyota and other Japanese auto makers began to emerge as some of the most formidable companies in their industry during the 1980s. By the 1990s, the major American auto makers had fallen behind their Japanese rivals in product quality and production efficiency, and were struggling to catch up. Engineers and production managers from around the world have studied Toyota’s tools for lean, efficient manufacturing. Toyota uses widely copied methods of integrating people, processes and technologies to manufacture highly marketable automobiles.

Toyota also has led the world in developing products that customers want. By linking its internal resources with those of its suppliers, the auto maker created an integrated mix of lean processes in both manufacturing and product development. Toyota treats products and the process of making them with equal importance. Generalists need not apply: Toyota relies on a profound level of specialization to create products that customers value.

Corporate culture influences each facet of Toyota’s operations, and its design and redesign of automobiles is no exception. Sakichi Toyoda led his family’s automobile...